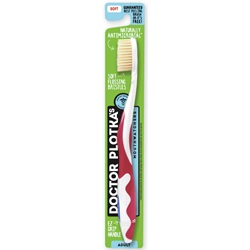 This adult-sized toothbrush is designed to eliminate 99.9% of bacteria - bacteria normally thrive on a toothbrush after use! In the warm, moist environment of an average bathroom, bacteria on your toothbrush can double every 20 minutes, resulting in as many as 100 million microorganisms on your toothbrush! This bacteria can lead to illness, cavities and gum disease.

Brush teeth after every meal!

This silver infused toothbrush is designed to eliminate all bacteria within 6 hours after use.

Nanotechnology is a rapidly growing science of producing and utilizing nano-sized particles that measure in nanometers (1 nm = 1 billionth of a meter). Nano-Silver is making an early impact in healthcare. Silver has been used for the treatment of medical ailments for over 100 years due to its natural antibacterial and anti-fungal properties.